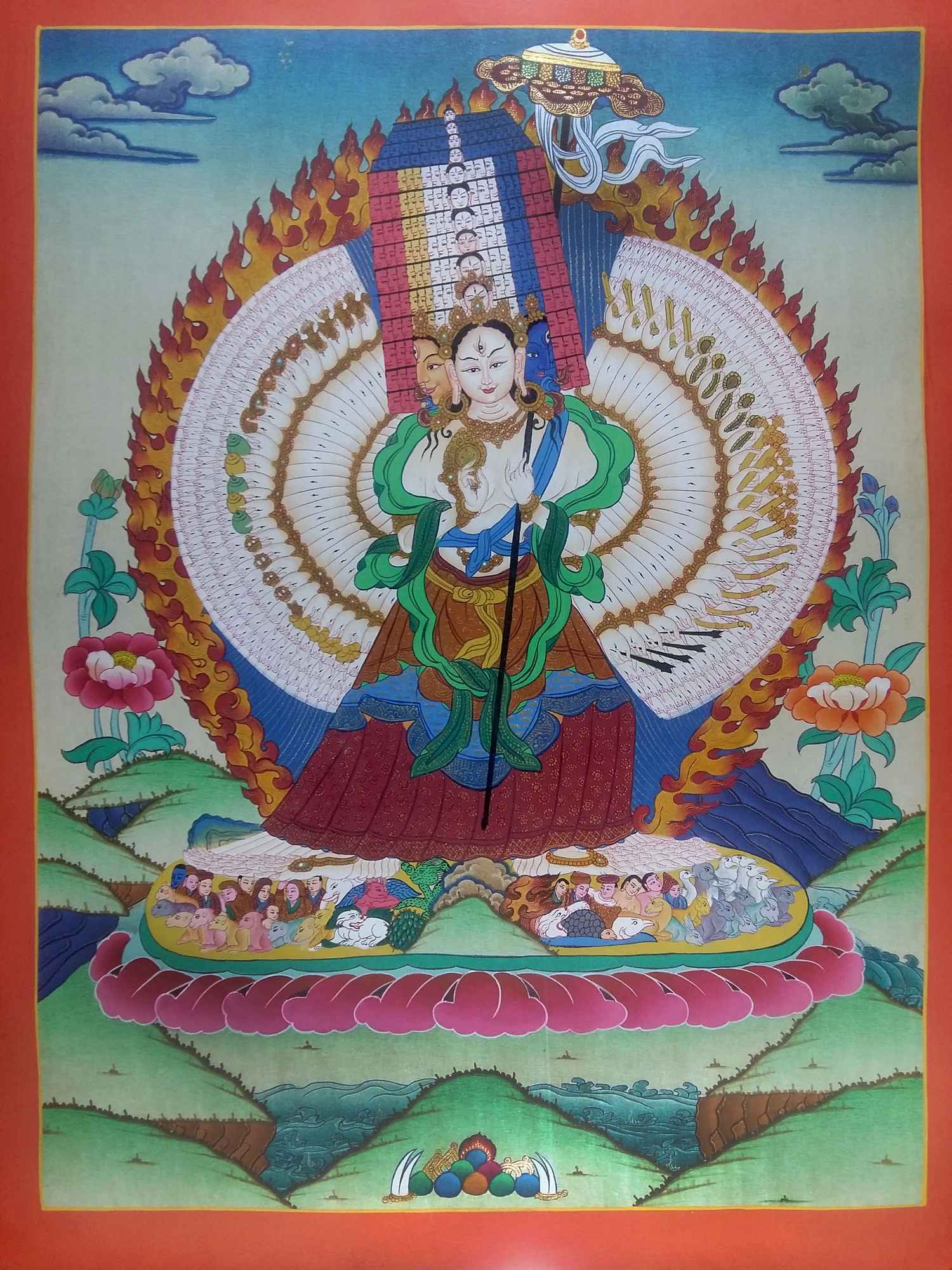 Sitatapatra Tibetan Thangka is handpainted in Nepal. Sitatapatra (Skt. Sitātapatrā; Tib. གདུགས་དཀར་, Dukkar), also known as White Umbrella Deity, is a female deity who appeared from the ushnisha of Buddha Shakyamuni, while he was remaining in samadhi in the heaven of the Thirty-Three.

Sitatapatra gained great popularity as a powerful method to avert obstacles in ancient India and has been continuously practiced up to the present day. Sitatapatra is invoked to protect the practitioners against calamities and malignant beings. Reciting her mantra is said to avert evil influences and purify defilements. Her Dharani is also said to have the power of protection when worn in an amulet, the power to alter the weather and offers immediate protection in adverse circumstances.

The Sanskrit name for the White Umbrella Deity is Ushnisha Sitatapatra which can also be translated as “The Victorious White Parasol.” Her parasol indicates her ability to protect sentient beings from natural catastrophes, diseases, and so forth. She is white in color because the principal means by which she accomplishes this function is the enlightenment energy of pacification.

Ushnisha Sitatapatra is a female form of Avalokiteshvara, the Bodhisattva of Compassion. Like him in his elaborate form, she also has a thousand eyes that watch over living beings, and a thousand arms that protect and assist them. Thus she symbolizes the power of active compassion.

Sitatapatra is brilliant white, radiating with love and compassion and her body is adorned with various ornaments. In her most common form, she is depicted with 1,000 heads, 1,000 arms, 1,000 legs, and 1,000,000 eyes. In her two central hands, she holds a dharma wheel and the handle of the white parasol from which she takes her name. In her other hands, she holds a multitude of various weapon.

Hum! Great and powerful goddess,
Born from the emanation and reabsorption
Of light at the crown of the protector Lion of the Shakyas,
Queen of Awareness, to you I offer salutation and praise!

You need to Login first